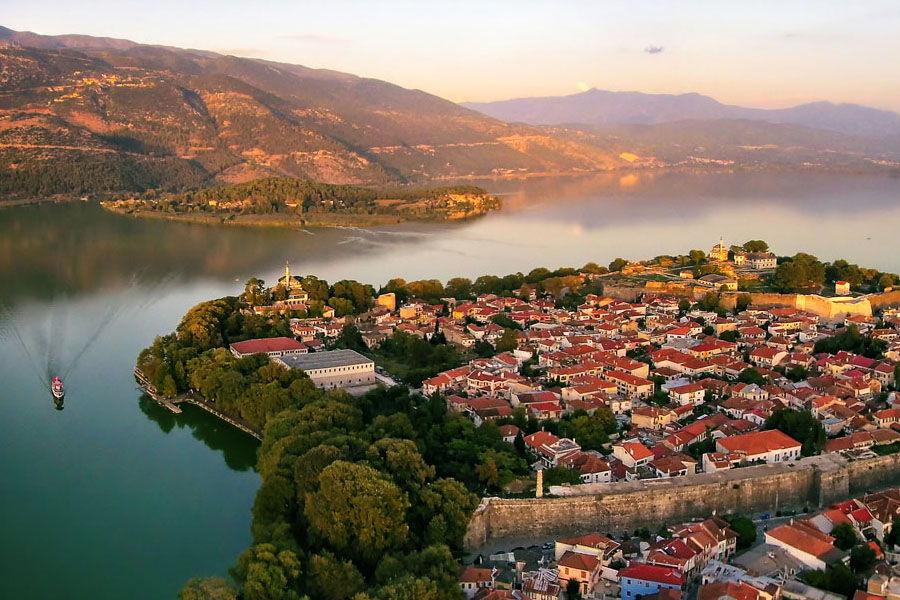 Ioannina, often called Yannena within Greece, is the capital and largest city of the Ioannina regional unit and of Epirus, an administrative region in north-western Greece. It lies at an elevation of approximately 500 metres (1,640 feet)above sea level, on the western shore of lake Pamvotis. Ioannina is located 410 km (255mi) northwest of Athens, 260 kilometres (162 miles) southwest of Thessaloniki and 80 km (50 miles) east of the port of Igoumenitsa in the Ionian Sea.

With a view of Lake Pamvotida

The routes around the lake offer exquisite scenery and plenty to explore. A tour by car is an experience to suit all kinds of traveller - there is much to see, much to learn about, and there is the serene calming effect of the lake. Towards the north exit from Ioannina, on the Metsovo arterial road, is the church of Agios Nikolaos ton Kopanon, named for the women who beat the clothes as they did their washing in the nearby traditional stone watermills by the lake. Tradition has it that Kyra-Frosini, the notorious mistress of Ali Pasha, was imprisoned here. 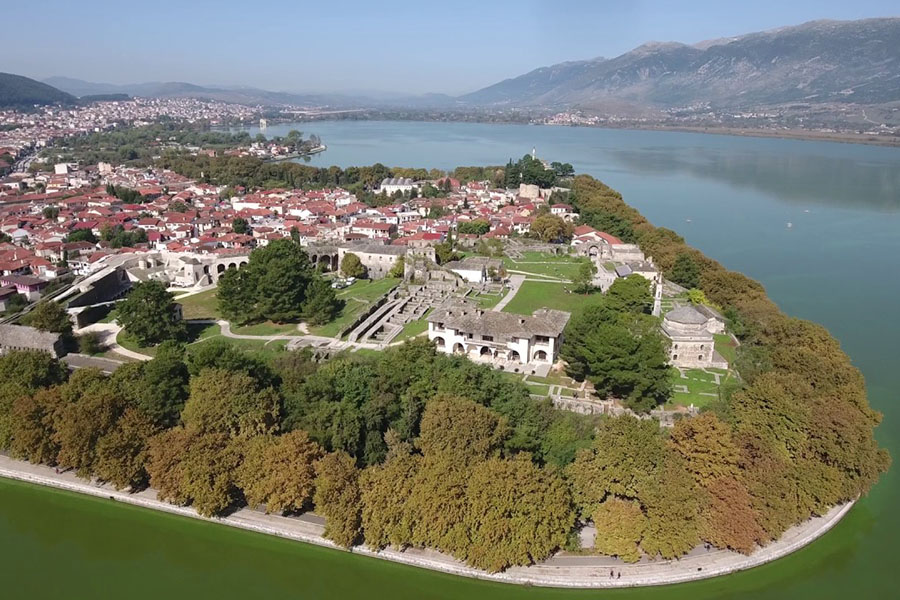 The castle town of Ioannina

The imposing castle of Ioannina was built in 528 AD by the Emperor Justinian, and was an ambitious expression of the might of the Byzantine Empire. It is the oldest Byzantine fortress in Greece with significant influence over the history of the town which grew around it. Over the years it evolved into a thriving centre with a highly developed intellectual life. Ali Pasha, that enigmatic symbol of Ottoman rule, lived here. His great love for the lady Kyra – Frosini resonates still as an integral part of the history of the town. Several monuments such as the Byzantine baths, the Ottoman baths, the Ottoman library, and the Soufari Sarai are located within the castle' s walls. The castle is divided into four sections: the outer wall, the northwestern citadel, which is dominated by the Aslan Mosque, the south-eastern citadel of Itch-Kale and finally the actual castle town - the old, walled town of Ioannina. The south-eastern citadel, Its Kale, is where the Fethiye Mosque, the tomb of Ali Pasha, and the Byzantine Museum are located. The newest addition to the city's museum, the silversmithing museum, is also located in the south-eastern citadel. It is housed in the western bastion of the citadel and outlines the history of the art of silversmithing in Epirus.

The Municipal Ethnographic Museum is hosted in Aslan Pasha Mosque in the north-eastern citadel. It is divided in three departments, each one representing one of the main communities that inhabited the city: Greek, Ottoman Muslim, and Jewish.

The island without a name

One of the most notable attractions of Ioannina is the inhabited island of Lake Pamvotis which is simply referred to as Island of Ioannina. The island in Ioannina’s lake is one of Europe’s few inhabited lake islands, the only inhabited one in the world without a name! The island is a short ferry trip from the mainland and can be reached on small motorboats running on varying frequencies depending on the season. The monastery of St Panteleimon, where Ali Pasha spent his last days waiting for a pardon from the Sultan, is now a museum housing everyday artifacts and relics of his period. There are six monasteries on the island. The monasteries of Strategopoulou (11th century) and Philanthropinon (1292) also functioned as colleges. The school continued its activities until 1758, when it was superseded by the newer collegial institutions within the city. The island' s winding streets are also home to many gift-shops, tavernas, churches and bakeries. 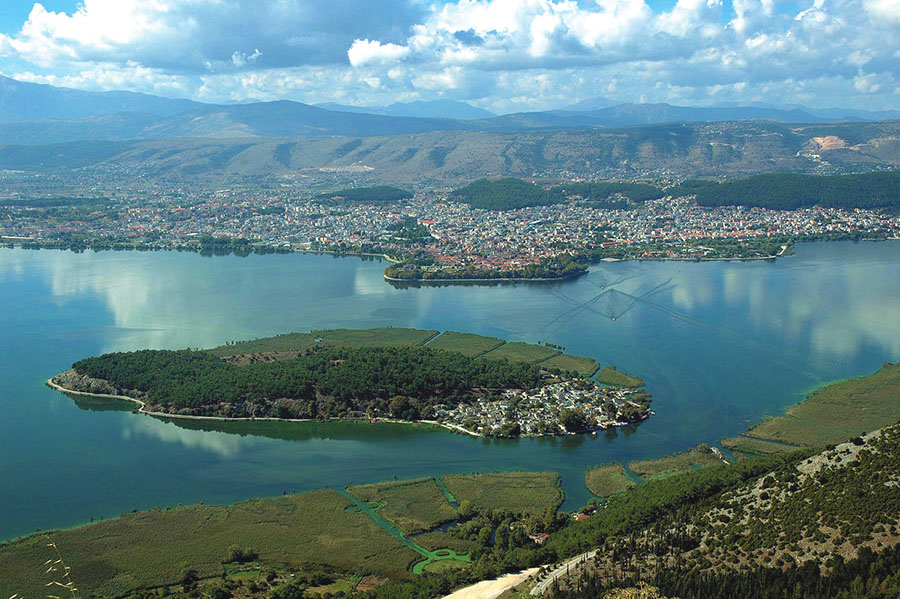 Outside the walls of the castle, close to the town centre, one will find the Archaeological Museum of Ioannina. It is located at the Litharitsia fortress area. It includes archaeological exhibits documenting the human habitation of Epirus from prehistoric times through the late Roman Period, with special emphasis placed on finds from the Dodona sanctuary. 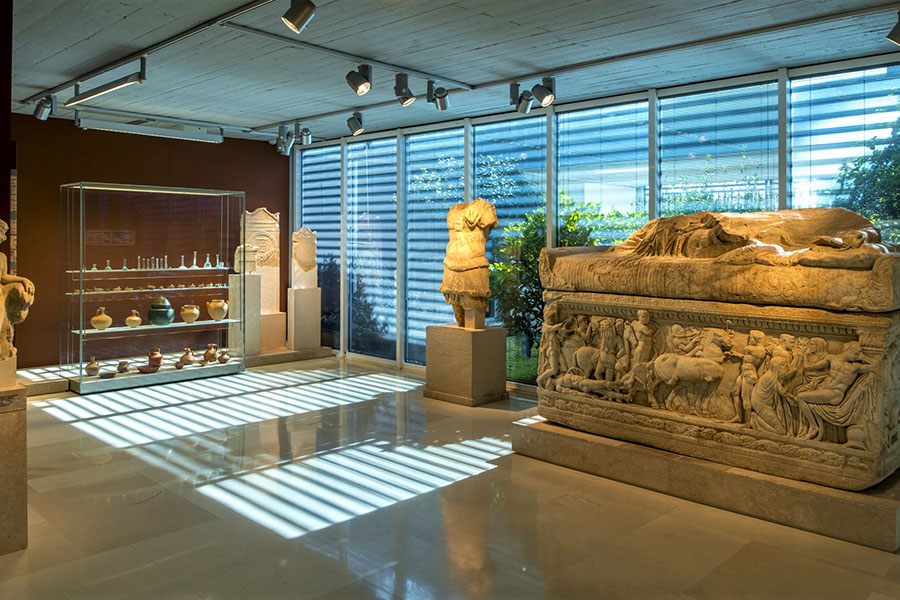 As the road continues on, it leads to one of the most beautiful caves in Europe, Perama. The cave, a product of karst formation, dates back about one and a half million years. The beauty of the chambers defies description. It seems impossible that the hall of the Cross, with its limestone worshippers, was formed without human intervention, and yet, it is a natural sculpture of truly stunning proportions. The Hall of Legendary Palaces looks like a fairy house.The stalactites projecting from the ceiling look like surprisingly complex yet harmoniously constructed chandeliers. The area around the cave is an ideal spot from which to look out over the lake and feel the magic of nature. The small train that runs from Ioannina to the picturesque village of Perama is a nostalgic choice of transport. 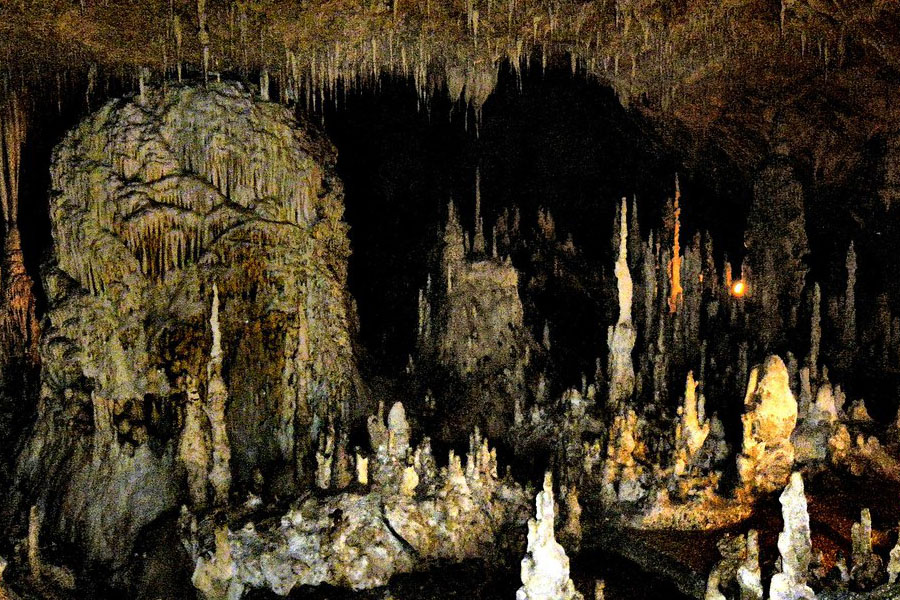 The Pavlos Vrellis Greek History Museum is located 10 kilometres (6.2 mi) south of the city. It is a wax museum which covers events and personalities from Greek history as well as the history of the region and is the result of the personal work of Pavlos Vrellis. The museum hosts 150 wax models in 37 themes, inspired by various events from Greek history. There are three thematic units in the Museum: pre 1821 history, Greek War of Independence (1821-1830) and themes from World War II.

The wax effigies of the museum are displayed in life size, included in a faithful representation of the environment of their age and revive forms of the local history. The visitor moves along mountains, houses, caves, churches, and alleys, following a non-circular but endless course, ingeniously devised and arranged.

Ioannina is famous throughout Greece for its silverwork, with a plethora of shops selling silver jewelry, bronzeware and decorative items (serving trays, recreations of shields and swords, etc.). 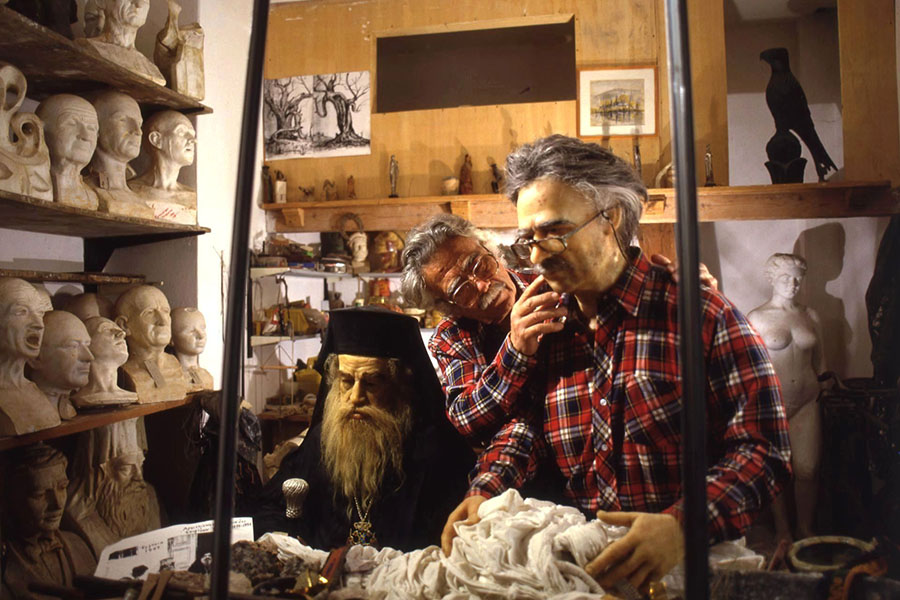 The Traditional Crafts Center of Ioannina is now a reality. It is situated in a central spot of the city of Ioannina, next to Lake Pamvotis in a space of 10,000 sq.m. There are silverware workshops, a museum, a cultural events hall, a cafeteria-restaurant and the Silver Craft Sales Agency. This is a place that everyone has to visit to get to know the Traditional Art of Hand Made Silverware.

Ioannina is famous throughout Greece for its silverwork, with a plethora of shops selling silver jewelry, bronzeware and decorative items (serving trays, recreations of shields and swords, etc.). 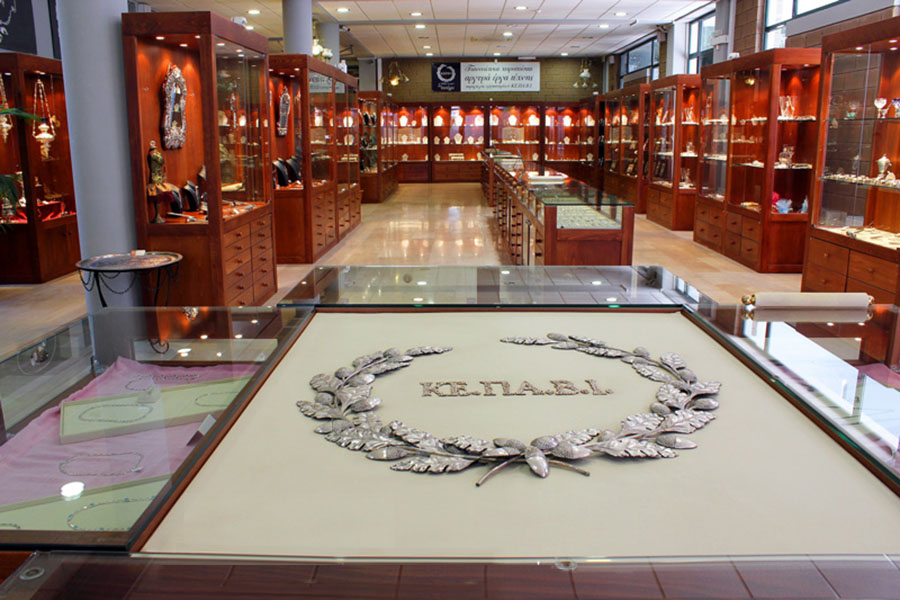 In the scattered Byzantine and post-Byzantine monasteries, one can admire superb frescoes of the time with special style and themes. It is in the Byzantine Ages when many monasteries and churches are founded in Ioannina region. The No Name Island only has six amazing monasteries. 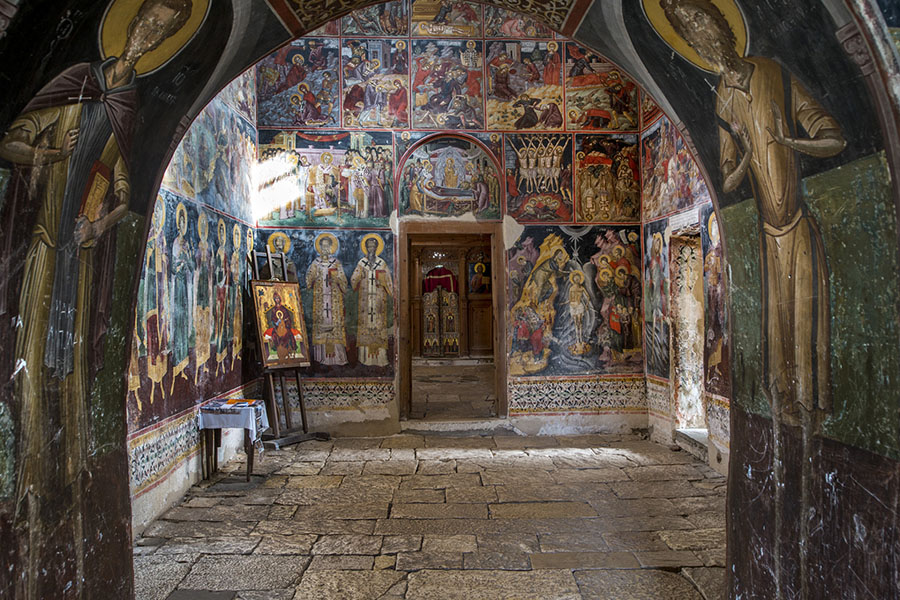 Zagori is a region and a municipality in the Pindus mountains in Epirus, in northwestern Greece. It covers an area of some 1,000 square kilometers and contains 46 villages known as Zagori villages (or Zagorochoria or Zagorohoria), and is in the shape of an upturned equilateral triangle. Zagori is an area of great natural beauty, with striking geology and two National Parks, one including the river Aoos and the Vikos Gorge, the other around Valia Kalda, to the east of the imposing snow-capped Mt Tymphe. The 46 or so villages of Zagori were interconnected by mountain roads and traditional arched stone bridges until modern roads were opened in the 1950s. The stone arched bridges were built by benefactions from expatriate merchants in the 18th century and replaced older wooden bridges. Since the 1980s, state initiatives aim to preserve the traditional character of the villages and the natural landscape. 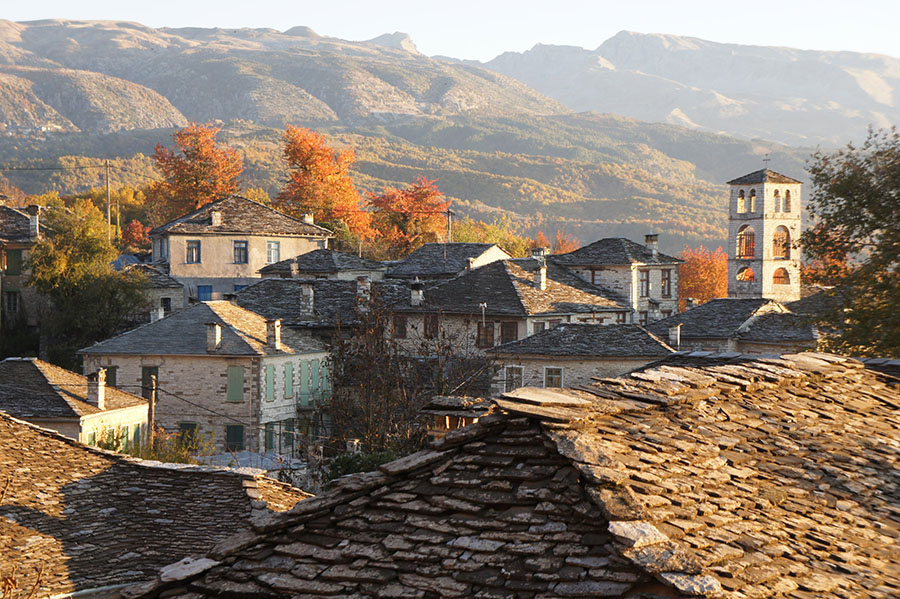 The Vikos Gorge or Vikos Canyon at the heart of the Vikos–Aoös National Park, is the most impressive natural feature of the region. A seasonal river runs through the Vikos Gorge which is about 38 km long. The deepest part of the gorge is about 12 km long. In the middle of its main part, far from road access or villages, it is traversed by Megas Lakkos, an equally deep secondary gorge. The Voidomatis river has its source in the Vikos Gorge and then continues to flow through its own smaller gorge into the river Aoös. The Vikos Gorge at 990m deep near Monodendri while Mt Tymphe, in which it lies, is 1350 m at its highest peak. It is one of the deepest gorges in the world, indeed the deepest in proportion to its width. The Vikos Gorge is also a site of major scientific interest, because it is in an almost pristine natural condition, untouched by human activity. It is a heaven for endangered species and contains many and varied ecosystems. 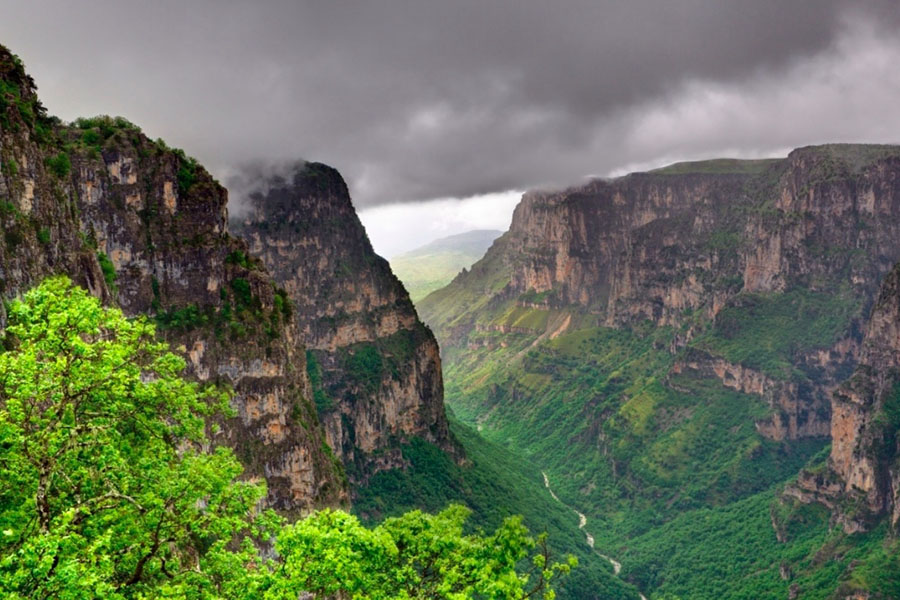 The ancient theater of Dodoni

The ancient theater of Dodoni in Epirus is one of the largest and best preserved ancient greek theaters. The capacity of the theater is 18,000 spectators. The theater of Dodoni was part of the Panhellenic sanctuary of Dodoni and was constructed in the 3rd century B.C. by King Pyrros of Epirus (297-272 B.C.) who wanted to decorate the areas of his kingdom with architectural monuments and buildings. The theater suffered successive disasters, reconstructions and formations in the centuries and during the Roman conquest was used as an arena.owadays the theater of Dodoni hosts some performances during the summer months. The ancient theater Dodoni is located 22 km from Ioannina. 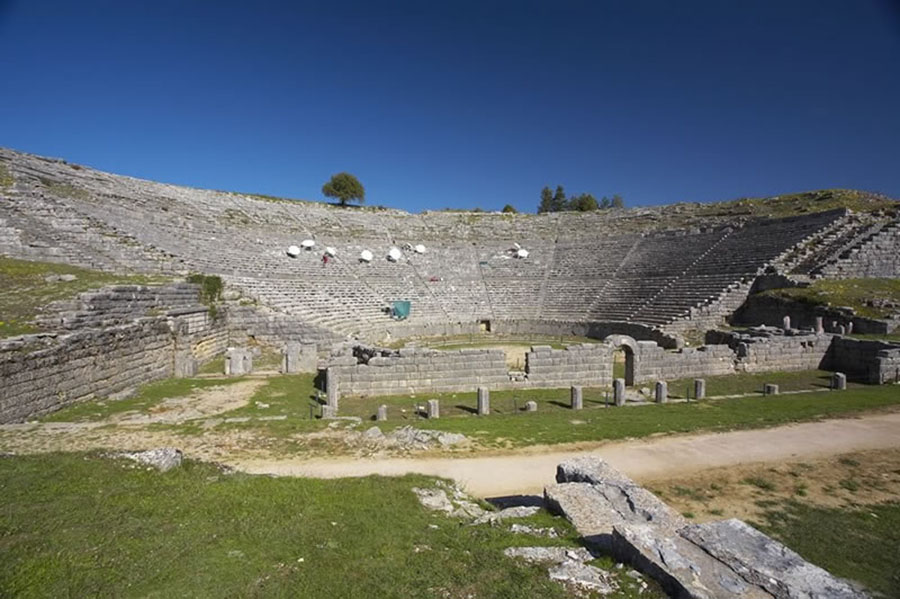 Greece without the sea and the sun is not Greece. Ioannina combines sea and sun with other experiences that are not found in the rest of the country, that's why Ioannina is a unique destination. Just one hour away from Ioannina, through the brand new Egnatia Odos Highway, there is one of the best coasts of the Mediterranean Sea, a coast that offers numerous leisure and relaxation options on the Ionian Coast.

Countless beaches on a 60km coastline, here are some of them: Kalamitsi, Mytikas, Monolithi, Canali, Kastrosikia, Ligia, Vrachos, Loutsa, Ammoudia, Agia Kyriaki, Lichnos, Parga, Valtos, Sarakiniko. There someone can find small, isolated, almost hidden bays, where he will be alone with the sun, the sand and the sea. The visitor can enjoy a wide variety of water sports, lounge on the sandy beach or visit a noisy beach bar with loud music and cocktails from early morning until several hours after sunset. 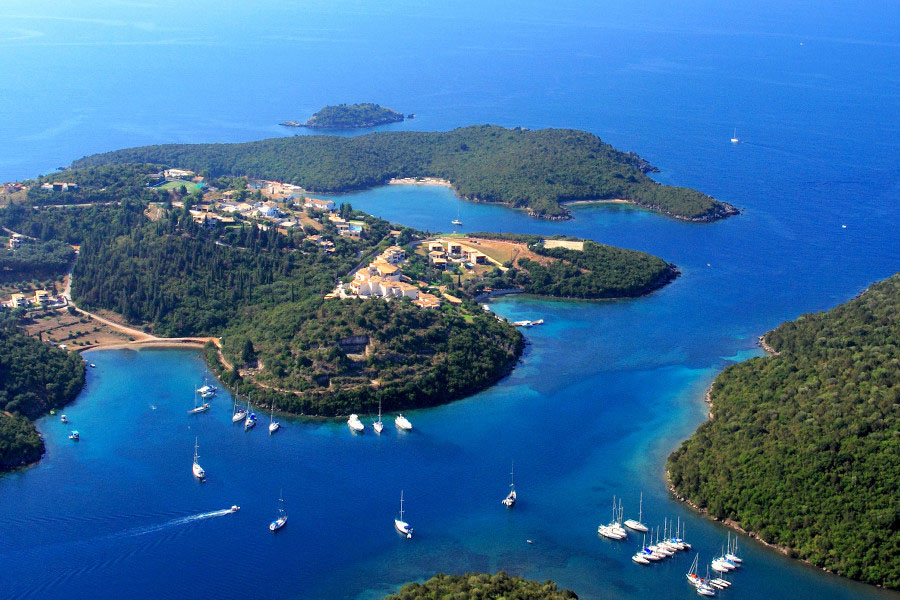 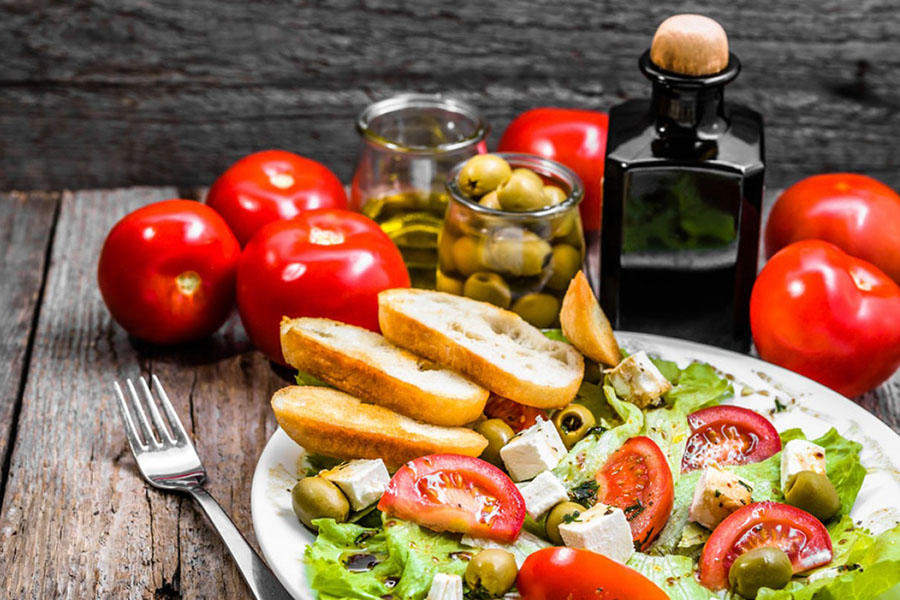